I attended the Safety at Sea seminar that was held in Seattle over the weekend of February 27th and 28th.  The seminar is held every two years, timed to coincide with the years the Vic-Maui race is held.  The seminar is a requirement for racers who want to race in offshore category races.  Its packed full of information and there were a number of cruisers who attended as well.  There were 110 people on the first day and roughly 85 for the second.

The first day's curriculum was:

All of the speakers were very knowledgeable and could have spoken on their topics for much longer than the time they were allotted.  It was an interesting day.

The second day included a pool session where you practiced getting into a life raft and other fun stuff all with full foul weather gear on and your life jacket.  Unfortunately I was only an observer during this session as it was full, so I didn't earn my ISAF certification for the session.  No offshore racing for me this year!  Offshore cruising is allowed :-)

The second day sessions had four streams, with three or four sessions happening at once (depending on the overlap with the pool sessions.)  Some of the sessions were duplicated so you could make sure you could see one where others were only held once - you had to make choices for what you saw.  The sessions I saw were:

It was a pretty worthwhile weekend, lots of good information was passed along and I have many notes and links to follow up on to explore the topics and related material in more detail
Posted by Craig McPheeters at 12:31 AM No comments:

I ended up with a few extra days off to make a long long weekend: Feb 19th to 22nd.  My original plan was to leave on a single handed trip for the duration.  As the date approached I realized that I have had little experience on the boat by myself and that a more gradual building up of skills isn't a bad idea.  So I had a change of plans.

Friday I went out all day on the boat by myself - it was great.  By now I've left the docks and gotten back to them by myself enough to be (foolishly?) confident.  Its still a little nerve wracking but its familiar.  I left the docks in the morning and headed south through the breakwater.  The autopilot came in very handy - I turned it on in the breakwater while going slow to remove fenders and lines.  Once out of the breakwater I headed up into the wind, engaged the autopilot and raised the sails.  The winds were light, 5-10 from the north.  The boat moved well, the seas were light, the skies were blue - it was a great day out on the water.  The autopilot was only used as a second hand when needed.  If I wanted to adjust a line at the mast I could engage the autopilot while I moved around the boat doing what I needed.  The auto tack feature isn't working properly yet, the controller needs some adjustment.  But tacking while standing in front of the helm and turning the wheel is just fine.  I headed north into the wind until around 3:15 at which point I turned around and headed back.  Again the autopilot was very valuable when taking the sails down and putting the fenders and lines back on.  I shouldn't rely on it as it could fail one day - but for now I'll be using it.  I got back at around 5pm, docking in 1-2 knots of wind.  Beautiful.

Saturday was pretty much a repeat of friday.  The winds were pretty much the same all day and I got to around the same turn around point.  There were more boats out on Saturday so it was fun to measure my boat to others as we tacked north and ran south.  I got smoked by a few boats while heading north and then passed another heading south.  Its not a race!  And Luckness is not a race boat, but she's fun to sail.

On Sunday the winds were calm and I worked on various projects rather than going out.  Monday was even more calm and I got some more things done on the boat.


Its a lot of fun to sail with others, and I like to learn what I can from them in whatever ways I can.  When sailing single handed however, I find myself becoming familiar with sailing in a different way.  Certainly being on the helm all day gives me more hours of sailing than with a larger crew, but the experience I'm gaining is more than simply more hours at the helm.  Being out sailing by yourself seems attractive to me.  I may change my tune when I'm out sailing alone and the winds pick up to 30kts or more and things get busy.  But for now, I'm really enjoying my time out on the water, alone or with others.
Posted by Craig McPheeters at 12:03 AM No comments:

Luckness has been out sailing in February several times.  Winter in Seattle is rumored to have strong south winds all winter.  I've heard that winter is the best time to sail locally, as in summer the winds are light and inconsistent.  Winter sailing is real sailing.  Winter sailing around Puget Sound rocks.  This is my first winter owning my own boat and having the opportunity (now that I'm only working on the boat during the week) to sail on the weekends.

We were out on three weekends in February.
Feb 6th and 7th Joe, Tim, Ivy and I left Shilshole to visit Port Orchard for a night.  There was a little work remaining to do on my anchor chain connection so I choose to not anchor out - the system was usable but I wanted to finish off a detail.  So we all left at 9am Saturday morning hoping for a nice winter sail - and were presented with blue skies and light wind.  We sailed for a while, barely making headway against the various currents until we had to start motoring.  We arrived at 4pm and were the only boat in the guest docks at the marina until 5pm when one other boat arrived.  Its a nice destination.  The town has a couple places to eat, a few bars, coffee, a bakery, etc.  We hit a few bars, played some pool, etc.  The next day the winds were just as light and the skies just as blue.  We made a stop at Bremerton marina to get some more coffee into our systems and then headed out again.  We ended up motoring most of the day once again.  As wind paws would appear on the still water we would pull the sails up - and then the motor would come on again when we stopped making progress.
The weekend of the 13th, 14th and 15th Ivy and I set out with a destination of Quartermaster harbor.  Again, we had blue skies and light winds.  We were able to sail most of the way to Blakely harbor where we anchored out.  This harbor is a nice local destination, with good anchoring and views toward Seattle's lights at night.  We were anchored toward the back of the harbor and were a little startled by a low rumbling toward the evening.  Looking out, there was an Argosy ship heading deeper into the harbor, where it get shallow pretty quickly.  They did a back and fill to turn around and then headed back out.  The boat must have been rented and the captain was giving his guests a tour while he was practicing his skills.  Cool.  There was one other boat in the anchorage all evening. 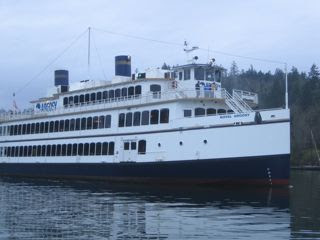 The next day we were able to sail most of the way to Quartermaster harbor, motoring the last hour or so in order to arrive before it was too dark.  It was a beautiful peaceful night at anchor - we were the only boat in the harbor at anchor!  Home made pizza for dinner - this isn't exactly like camping where you need to rough it eating freeze dried with bugs. 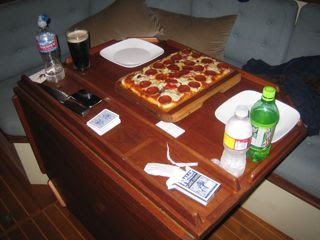 On monday we motored out of the harbor through fog into clear air to find no wind - flat calms.  We motored back getting there around 4pm.  Lunch time found us around the top of Bainbridge were we powered down to watch the views while we ate.
All the new systems on the boat worked well.  The new furnace kept us very warm and doesn't draw enough power to be a problem while at anchor for a few days.  A better test of the power draw will come when we have better winds and don't motor as much which ends up charging the batteries.  The windlass is great, the autopilot works well.
The downside for the two weekends was that there wasn't much wind.  There were a lot of upsides - sailing slowly or motoring with good company during warm days with blue skies in February is not such a bad thing!
Posted by Craig McPheeters at 11:25 PM No comments: