I returned to La Paz from my latest trip to the islands on thursday, Feb 16th.  I was away for 18 days this time.  This is likely to be my last return trip to La Paz this season.  I'll be moving along with my journey in a week or so.

On this latest trip to the islands, I saw some of the same places I had been to earlier along with a few new things.  Since the local islands are so beautiful, I don't mind repeating the same anchorages more than once.  I decided long ago to spend more time in the local area rather than sailing far and wide visiting as much as I could but not staying anywhere very long.  I've really enjoyed these islands.

After leaing La Paz to start this trip, I returned to Bahia San Gabriel where I stayed for a night.  The next morning I moved on to Ensenada Grande where I stayed for a few days.  There are three lobes to the anchorage at Ensenada Grande and when I arrived the middle lobe was empty and so that is where I pulled in and collected another little anchoring story...  The middle lobe is fairly small, but large enough for two or three boats.  The morning of the 1st another boat pulled in and anchored 240ft away (which I measured via my radar.)  I went for a hike that afternoon and when I got back I found the boat was now 120ft away, although the wind direction hadn't changed and the wind wasn't very strong (in the 10-15 range.)  They were dragging down on me.  I had around 120 feet of chain out in 20 feet of water - and so rather than going over to try to convince them to move, I quickly decided that I would move and within a few minutes I was raising the anchor.  As the anchor was raised Luckness was being pulled closer to the other boat, with my closest point of approach being less than a boat length.  Yikes.  I moved to the north lobe of the bay which was empty.

On the 3rd I left Ensenada Grande for a new island - Isla San Francisco which is roughly 20 miles north of Ensenada Grande.  The forecast was for NW 5-10 knot winds and what I got was NW 15-22, meaning I was sailing upwind all day.  The wind had been calm all of the previous evening and night so the waves were small and it was a fun day.  There was lots of spray all over the boat but the boat was moving along nicely - it was a good sailing day.  When I arrived in the anchorage I found Sockdolager again!  Yay.  We both had plans to spend a few days at anchor there and then to continue exploring north along the Baja coast and the islands to our north...but that didn't turn out.  Isla San Francisco was a really nice spot, and in the end I spent 8 days there.

I was approaching Isla San Francisco and I was feeling mighty fine after a good days of sailing.  I approached the anchorage and found myself on the wrong side of the island.  It was getting later in the day, and rather than sail around the island to the anchorage I decided to simply sail across the island to the correct anchorage, as shown in this picture of my chart plotter:
Before coming to Mexico I kept hearing how inaccurate the charts are and have seen examples of this during my stay.  This is the most inaccurate I've seen the charts so far.  Sailing in Mexico reminds us that chart plotters are simply an aid to navigation, and not to be relied on.  (The whole island needs to be shifted on this chart north and east, Luckness was anchored in the bay shown as an indent on the SW side of the island.)

I was here for eight days but wasn't idle.  There is good hiking along the ridge line, you can explore the other side of the island, snorkel, read, enjoy the sun, visit with Sockdolager.  Ok, so I was a little idle while I was here.  It was a good time.

I had a few goals on this trip, which are roughly to continue preparations for the next leg of this journey - the passage to Hawaii that is coming up.  While at anchor I was continuing to review the Celestial Navigation book I had on board, written by David Burch.  Karen (on Sockdolager) also knows celestial navigation and we practiced some sights while here.  We tried sun sights, latitude by local apparent noon and later I tried a few star sights.  As an aside...now that I'm back in La Paz I've been able to download an app to my iPhone to help with the sight reductions: StarPilot for the iPhone.  Its an awesome app, and if any of you want a good celestial app I recommend this one.  Or more to the point, David Burch (author of many good books dealing with sailing topics) recommends this product and I agree with him.

I wanted to be back in La Paz for the Carnival and on Feb 11th I started making my way back again.  I left at around noon when the wind started to arrive for Ensenada Grande, getting there just after 6pm.  I sailed as long as I could before being forced to turn on the engine so that I could avoid anchoring in the dark.  While sailing over to Ensenada Grande I came across a huge pod of dolphins - hundreds and hundreds of them.  They were staying together as a group but not really going anywhere in particular.  They were coming toward me slowly and ended up passing closely by my stern from my port side to starboard.  Later they changed direction and went back the way they had come.  It was an awesome display. 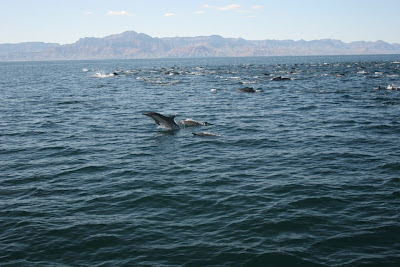 A couple of days later I moved a little more south to an anchorage I hadn't yet been to: El Mezteno. 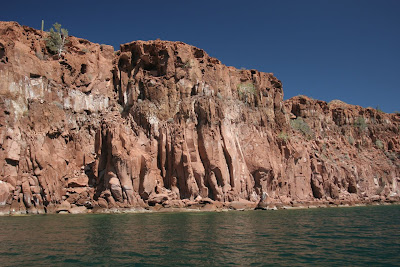 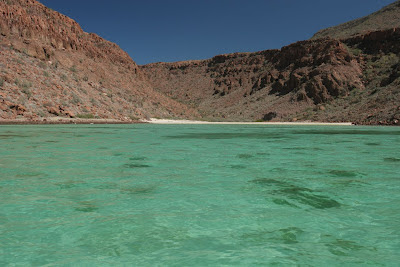 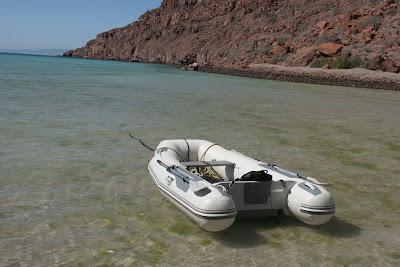 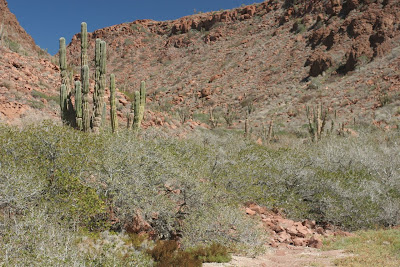 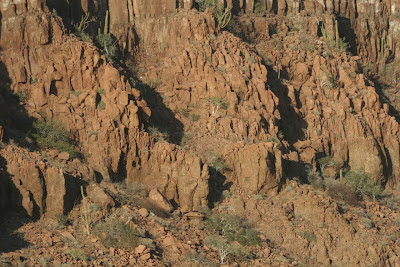 The afternoon was beautiful in El Mezteno.  I explored in my dingy, got to shore for a walk and then went for a swim back at the boat.  I also decided to start cleaning the hull again and to change the zinc's on the boat as they needed it.  When I was in the water I was seeing bits of seaweed around me and feeling little stings on my right arm as it was moving back and forth cleaning the hull.  I didn't think much of this -  the seaweed was a little spiny and I thought it was causing the little stings.  Then I finally focused in the water close to me and saw there were thousands of tiny jelly fish.  They were small and completely transparent.  The critters were a single sack with four dangling tentacles and were totally infesting the water here.  I got out pretty quickly after realizing this, and a short time later welts started raising on my right arm which was moving through the water the most.  The welts lasted for a few days.

The weather for the last part of this trip was starting to be pretty random.  The forecasts and reality were diverging pretty wildly - light winds were forecast and stronger winds arrived from the east, south and west.  For a few nights in a row there was 15 or more knots of wind blowing into the anchorages creating pretty rolly conditions.  I moved further south the day after arriving in El Mezteno and didn't see any other boats in any of the anchorages on the island which is unusual - it seems that everybody had left back for La Paz to avoid being rolled around all night.  I pulled back into Bahia San Gabriel and was the only boat in this large anchorage.  I positioned myself in the middle, in around 25 feet of water where I could have dragged my anchor for 1000 feet in any direction without it being a problem.

I continued cleaning the hull while I was here, making sure there were no more jelly fish in the water.  I was using a scotchbrite pad on the hull, and when I got to the bottom of the keel I found a bunch of barnacles as my bottom paint hasn't covered this area very well.  I was able to rub the barnacles off with the scouring pad, but in doing so I felt a few small scratches on my right hand, I didn't give it much thought.  When I got back into the boat, the scratches weren't visible, no blood, nothing serious...  A little later I found the skin on my right hand started to go numb.  The numbness spread from two of my finger tips (where I was rubbing the critters off the bottom of my keel) and up into my hand.  This was a little freaky.  After a few hours some tingling returned to my hand and a few hours after that the numbness had faded.  I'm learning that some of the creatures in these waters have pretty good defense mechanisms!

The final sail back to La Paz was that, a sail rather than a motor.  The forecast was for west 2-4 knots and I got SW winds up to 16 knots or so, which was awesome.  I sailed to within a half mile of the entrance to the harbor, lowered sail and was back in Marina Costa Baja in the slip I had left 18 days earlier by early afternoon.


I've started to spend less and less time thinking about what I should be doing and seeing where I am in favor of planning and preparing for my passage to Hawaii.  I'll begin the passage to Hawaii sometime in early to mid March, and am looking forward to it.  There are a few boat projects I would like to work on while I'm here, there is some more reading I would like to finish up (I'm now reviewing my marine weather books) and then there will be provisioning, checking out of the country and getting started.  When I leave the marina, I'll make my way down the coast toward Cabo San Lucas where I will do a little more provisioning and then finally check out of Mexico and start sailing across the Pacific.

I left Seattle on Sept 1st and roughly 2200 miles ago.  When I left, I had been planning on spending a year out for my training year, and the year is now almost 1/2 over and the distance I will travel is around 1/3 done.  I'm looking forward to the remainder of this Training Year and to the years that follow.
Posted by Craig McPheeters at 9:44 AM 10 comments: