When I started working on her I noticed that the length of boat projects are mainly around twice as long as I would have expected.  I thought that over time my estimate accuracy would have improved, but that doesn't seem to be the case.  Here is another example of this...

Luckness' exterior is mostly fiberglass.  The caprails are teak, as are the hand rails, companionway hatch, and a few other pieces.  The varnish that was on the boat (actually Cetol, a varnish alternative) was worn out.  Once varnish starts to peel its too late for it, you need to start over.

Teak is an oily wood and the oil in it naturally protects it from the elements.  Many owners leave their teak to turn a natural grey, and it can last many years like this.  Over time, unprotected wood can wear down.  When I was looking at other boats before buying Luckness, I saw examples of boats the same age where the teak had been left unprotected and had worn to the point where it might have required replacing the wood to restore it.  Replacing he wood would be a horrific project, I do not ever want to do that.  As I would like to head down south eventually (Hi Boss!) where the sun is SuperBright I wanted the wood to be protected, and if protecting it now required some work that's what I would do.  "No shortcuts" is my motto.  I'm not afraid of a little work.  Do the project right.  No pain no gain.  Work now play later.

Here are a couple of the 'before pictures'. 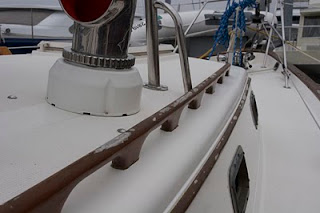 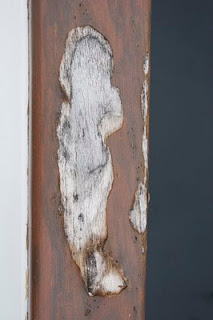 After my summer vacation, which was spectacular, I came back to Seattle and there were blue skies and no rain.  Its like this every summer for a while.  I realized that if I was going to fix the varnish, that now would be the time to start.

There followed a short period of doing the research into different varnishes and the techniques.  I got some advice from Terry at Yachtfitters regarding the work, and off I went.  The varnish I choose was Epifanes Wood Finish Gloss.  This product does not need sanding between coats, which allows you to build thickness quickly.  I'm pretty happy with Epifanes, it was an easy product to work with.

My plan was to spend up to a month doing this, and then enjoy some more sailing.  I started this July 17.  Once I started, I took enough of the hardware off Luckness make working on her easier - but this meant she couldn't be sailed until reassembled.

The first step is to scrape the old varnish off the wood.  This involved using a heat gun to heat the old varnish and using a scraper to scrape it off.  I first scraped an eyebrow, the piece of wood below the handrail in the picture above.  Once that piece was done I sanded and started varnishing it.  I wanted to go through the entire process for one piece and learn before doing to rest.  Scraping the wood brought the teak back to its natural color, which looked good.  Sanding and varnishing the eyebrow looked amazing. I was getting hooked on this project.  I learned how thick to apply the varnish, now much time it needed between coats, what happens if you apply too late in the evening and you have dew that night (you lose all the gloss overnight) and how often to replace the tape I masked the wood with (no more than three coats.)  Having done that piece, I started on the rest of the boat.

There were two solid weeks of scraping - as I have a paying full time job, I can only do this weekday evenings and weekends.  The day job really interfered with this project!

When the scraping was done, I picked as many surfaces as I thought I could varnish in an evening and worked on those to completion - and then started on the next group.  When you throw in a few days of varnish fatigue, a few days of rain, its taken me most of the time between July 17th and now to work on it.  I had to disassemble the companionway to get the companionway cover out, as I didn't want any of the old varnish left.

Here is the boat during the project. 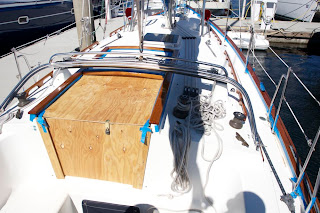 That picture was taken August 25th - still a lot of work to do.  Notice that the sun is shining and that it was taken in Seattle.  Also notice that the companionway in the picture above is temporary - the real one was in my basement along with the slats being refinished.

Its now Sept 19.  The exterior varnish is all done, except for the two pieces of wood which hold the companionway hatch in.  I'll do those over the next week or so.

The first picture below is of the caprail.  Compare it to the one above!   Can I have a few oooooh's and aaaaaah's? 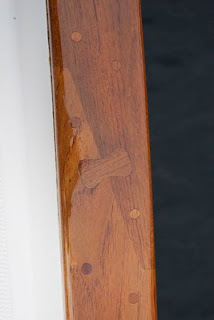 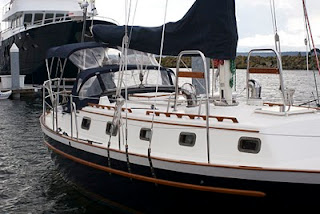 I would like to say the project was totally worth it....but I want my summer back!  I thought this project would take a month or so, and now 8 weeks later I have a little bit of work left on it.  The wood looks really good now - but its started to rain here and I haven't sailed in 8 weeks.


I knew this was going to be a lot of work, and it was - much more than I expected.  Next year I can add a coat or two and that will be all that's needed.  That's part of the beauty of doing this work, once the varnish system is established properly, future maintenance is greatly reduced.  That's what I keep telling myself.  "The project was totally worth it!  I'm so ahead of the game now!"

I did take a few shortcuts - there isn't a mirror finish to the varnish, but its pretty acceptable.  Somewhere between utility and perfection.  It worked out well.  I didn't show the supply of bandaids I went though - it seems that when working with sharp tools for hours on end that its difficult not to cut some part of me.  All my digits are still intact.


I changed the oil in the engine today, along with the oil filter and transmission fluid.  There had been 120 engine hours since the last change, so it was about due.  I'd like to get the boat out sailing rather than working on it, just a couple things left to complete...


15 months of boat ownership.  It has been more work than I expected, and there has been less sailing than I had hoped for.  When I look at Luckness now and compare her to when she arrived, I'm really happy with the shape she's in.  The work I've been doing over the time I've owned her really shows - she's a solid boat and I smile everytime I see her.  My "no shortcuts" motto cuts into some of the fun, but I simply couldn't do it any other way.  I've progressed as a sailor over the 15 months, and yes, I'm including sailing skills such as being able to maintain your boat along with the other more traditional sailing skills - such as actually sailing.  I've learned things that I wouldn't have been able to learn through chartering boats.  Its been 15 months, some of it hard work - but I wouldn't change any of it.  I'm looking forward to the many more months to come.
Posted by Craig McPheeters at 11:05 PM No comments: