Before leaving on my last cruise I wasn't happy with the gaskets I had in all of my cockpit lockers.  There are port and starboard aft cockpit lockers, a propane locker, a lazarete and the cockpit sole which comes out to give engine access.  There were gaskets on all of the lockers and the sole which were old and leaking.  I searched through McMaster-Carr for good gasket material and found what I thought were a few promising pieces.  So I bought a bunch of gasket material and installed it on all the lockers.

Unfortunately, I found that the gaps between the different areas of the locker lids and the locker were not uniform.  So I bought some thinner gasket material and tried to blend it in to the thicker material I already had.  I tried a couple of times to get a decent seal and finally ran out of time without a good solution.

In the first picture above, note that the thicker gasket material on the outside (right) isn't really thick enough to seal well on the outside of the locker while the thinner material on the left is too thick in parts.
I left on my last cruise with the lockers sufficiently sealed to keep out rain but I was unsure how much of a problem the gaskets would be out on the open ocean.   It turns out that it is a minor problem - you end up with lots of waves which find their way onboard and once onboard the water finds its way into the lockers.  It wasn't a huge problem - the extra water leaking in wasn't going to sink me, but all of the lockers leaked.  The engine and transmission are below the cockpit sole gaskets and leaking saltwater isn't good there (although I kept on top of this, no damage was done.)  The propane locker also has mechanical and electrical bits which do not like salt water (all replaced recently,) the fridge is in the lazarette and I don't want that to have salt water dripping on it, and in general all of the lockers have bits and pieces which I would like to keep isolated from salt water as much as possible.

So, I wanted to find a better solution before leaving this time.

Once I understood that the thickness of the gasket material had a very wide range in the different areas of the locker lid, I realized that I wouldn't be able to find a material that would work well.  After a while I decided to try to form my own gaskets out of something - I settled on Sikaflex 291.  Sikaflex is a medium strength adhesive sealant, and when cured is slightly flexible.  I thought it would adhere well to the locker lid and hoped that it would be tough enough to withstand some abuse as the locker lids were opened, closed, stepped on, etc.  There are probably other sealants which would work just as well.  Sikaflex is slightly less expensive than 3M 4000UV which would also work well I think.

Once I had decided on the gasket material I had to experiment a little to find an approach that worked.  I tried three times to form the gaskets in the lockers - the third time worked pretty well.  If you're interested in doing something like this yourselves, this might save you some time.

After several trials, I found an easy way to figure out where the sealant needs to go and how thick it should be.  The problem is that unless you have a small volunteer who is willing to climb inside the locker while you close the lid on them and have them trace the inside of the locker lip on the lid, its not always obvious where the locker lip meets the lid.  I have some modeling clay onboard - but silly putty or some other clay-like material would work here.  Form a thick tube, put a strip of blue tape down on the locker lid in the area you think the lip will hit, put the clay there and then a small piece of wax paper on top of the clay and close the locker lid.  Open the lid and see how the lip impacted the clay.  Make a couple of marks on the lid to indicate where the lip is at that spot and make a mental note of how thick the gasket should be at that point.  Move the tape over slightly, reform the clay into a tube, and repeat until you have a whole series of dots indicating where the locker lip hits the lid.  Then connect the dots.
You probably want to buy a number of the tubes of sealant, and practicing on a locker might be a good idea as well.  I did!

Now simply go around with the sealant and apply a thick bead in the lines you found - the sealant is going to be the gasket, so make it thick enough to form a good seal between the locker and the lid.  This is where its useful to have made notes on how thick the clay tube was when you closed the lid on it around the locker.  Some areas are paper thin, others are quite thick. 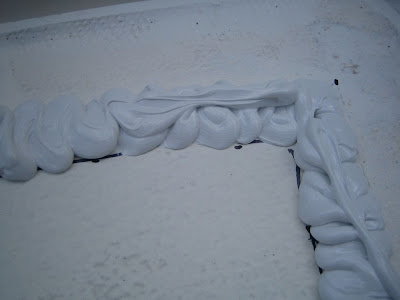 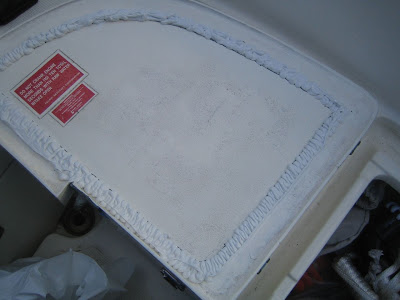 You want to apply a wide enough bead so that when the gasket forms, there is extra sealant on each side of the locker lip - I wanted the gasket to not just form on top of the lip, but seal its edges slightly as well.  So use lots of sealant.

At this point, you have the problem of how do you close the locker lid with the fresh sealant on one slide without the sealant sticking to the locker and forever sealing the lid to the locker.  My first attempt was to apply foil to one side - which upon reflection was a really bad idea and which turned out very poorly.  The sealant adhered to the foil very well, making it pretty much impossible to get off.  However on that first attempt I also applied blue tape to the outsides of the lines I formed when connecting the dots - and I found that the sealant did not adhere to the blue tape.  I discovered that I didn't want the sealant to be only inside the lines, so no need for blue tape there - but the fact that Sikaflex didn't adhere to blue tape was useful - cool.

Once all the tape and wax paper is applied, I ran my fingers across the wax paper smoothing the sealant out slightly.  Now you have to form the gasket out of the pile of sealant you have.  At this point I would close the locker lid and briefly close the latch securing the lid in place.  Then I would release the latch and not touch the locker lid again for several days.  After three or four days I removed the tape.  The tape came off pretty easily - Sikaflex 291 and 3M blue tape don't seem to stick.  The sealant was still just slightly tacky at that point, I would make a point of opening and closing the locker lids a few times a day just to make sure the tacky sealant didn't adhere to the locker.  After a week or more the sealant is fully cured and you have new gaskets.

I found that the tape would crease in some spots which you can see in the image above on the left.  These creases may be allowing some water in, allowing leaks to get into the locker.  I'm not sure how to avoid those.  It would be easy enough to apply a small bead of sikaflex in the fold area, then blue tape, wax paper and fill in the gaps.  I might do that.

I completed this project a little over two and a half months ago as I write this.  At this point, the gaskets are still slightly flexible which is how I expect them to remain.  I think this is going to work.  I found that when I spray a hose directly at some areas of the locker a little water will come through, but the lids all have a much better seal than they ever did in the past.  The gaskets that formed are very thin in parts, and gradually get thicker and wider as needed, conforming to the locker lip.

Once again I'm glad that I don't have to pay myself by the hour - these would be expensive gaskets!  However the results I have so far are much better than I was able to achieve by buying pre-made gasket materials.  If I can isolate the leak areas I think I will be able to apply some more Sikaflex to those areas and build up the gasket to cure the leaks.  If the leaks I find are a problem then I'll consider building up some more material.  What I have now is much much better than what I used to have.