After arriving in La Paz on December on December 21st, I left on December 28th.  There were a few of the local stores that I was hoping to get into to start buying some boat parts - but they were closed over the Christmas/New Years holidays, and I decided to head out to the islands for a quick cruise.  Well, that cruise is still going, and will probably last for at least another week, maybe two.

I left La Paz to head to Espiritu Santo, stopping for one night in San Gabriel.  The seas there were 71 degrees, and I spent time in the water cleaning the hull and changing the boat's zinc's.  Its nice to be able to do this myself again.  I left the next day and headed to Ensenada Grande.  I wanted to wait for nice winds for the sail north to Isla San Francisco, and after four days, winds I like arrived and I left and sailed north.  Before leaving, s/v Swan arrived and I was able to meet up with Dave and Rhonda again.  I hadn't seen these two since I left San Diego in 2011 and it was really good to see them again.  They were finishing up a cruise to the islands they had started before the holidays, I was starting mine and up paths diverged as they headed south and I headed north.

Isla San Francisco was my favorite anchorage during my last visit to Mexico in 2011/2012 and its once again my favorite of this trip.  Its such a beautiful spot.  I spent nine days at anchor, thinking of my time there as being part of a fitness club.  There is good hiking on the island, and I explored more of it this time than I did on my last trip.  My days there were something like: get up, have some coffee, read for a bit, eat breakfast, go for a hike for two to four hours, get back to the boat, swim for 1/2 to 1 hour, get back to the boat, relax, read, eat dinner, and try to stay up until 'cruisers midnight' - which is around 9pm.  This hiking wasn't that strenuous as the hills just aren't that high, but it was beautiful.  The swim was much better than in a lap pool, as I would swim the 400 feet from my boat to a rock wall and then along the wall which was something like 1/4 of a mile long, with mask and snorkel in the water looking down at rocks and aquatic life which was in abundance around me.  Beautiful swimming here.  No sharks to worry about either, which is sweet.

On January 7th, s/v Discovery arrived I was able to spend some time with Andy and Betty.  Discovery is a boat name that I hope keeps appearing in this blog, as Andy and Betty are also planning on doing the Puddle Jump and exploring French Polynesia this year.

On the 9th, Discovery and I left for San Evaristo, which is a small fishing village 9 miles north.  There are two small stores in town, along with a place to buy farm fresh eggs.  When I say 'small stores', they really are small.   I walked by them both on my first pass through 'town.'  On my way back, I was able to discover the building that matched where the store was marked in my cruising guide, and after approaching the building, and opening the door to what seemed like a house, I found the goods for sale on shelves.  The owner arrived a few minutes later.  The next day I met a cruiser at anchor and he was able to pass along some more info, asking if I had found the second store, next to the first.  I hadn't, so he explained how to find it, along with the egg secret.  The second store is a white building with a red stripe at its base, and is government subsidized, good for some veggies and dried goods.  I also discovered that the first store had a freezer outside full of frozen products - chicken, beef, milk, cheese, etc.  Suddenly I was stocked up with all the food I needed to last for a little more exploring.

I left San Evaristo after 4 days, heading north.  I made it to Bahia San Marte, thinking it would be a good spot to wait out the strong north winds which were scheduled to arrive.  There was nobody else there and it was a beautiful spot.  The anchorage provided good protection from the winds, and spectacular scenery for the week I spent there.  My fitness club lifestyle altered as I didn't go to shore at all while there.  So my day changed to keep the swim, exclude the hike, and include some reading into the cruising I will soon be doing in the South Pacific, along with some boat projects that had been pending.  I have several cruising guides for the South Pacific and hadn't yet spent any time reading them - so this was a perfect opportunity to dig into them.  I'm super excited about my trip to the South Pacific that is coming up for me, and now that I've started some more detailed 'research' into the details, its becoming more and more defined for me.  It was a week well spent.

I left on the 18th for Puerto Escondido where I am now, having found Discovery at anchor here as I pulled in.  I arrived yesterday and will leave tomorrow. Its a beautiful area.  I'm in the inner harbor, a mooring ball costs $15/day.  There is a small store with enough variety to allow me to provision for a few weeks, and that's what I've done.  I'll be leaving here tomorrow to return to the local islands and then make my way slowly back south toward La Paz.  I'll probably pull into a marina for this stay in La Paz, as I have some boat projects that I want to get after before I start my crossing to the Marquesas, the South Pacific and beyond.

I'll be out of internet range again when I leave here, probably until I arrive back in La Paz in a week or two. 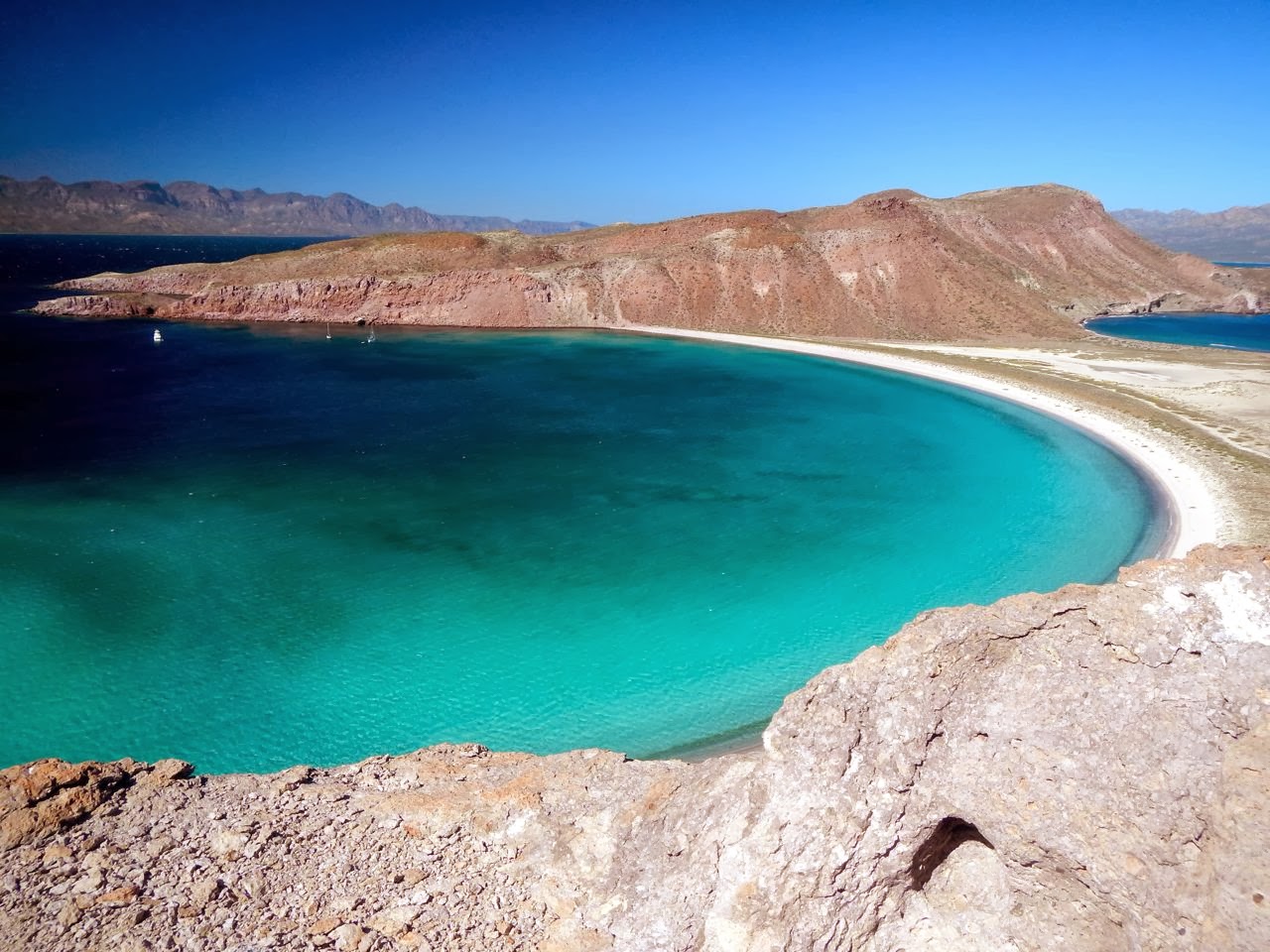 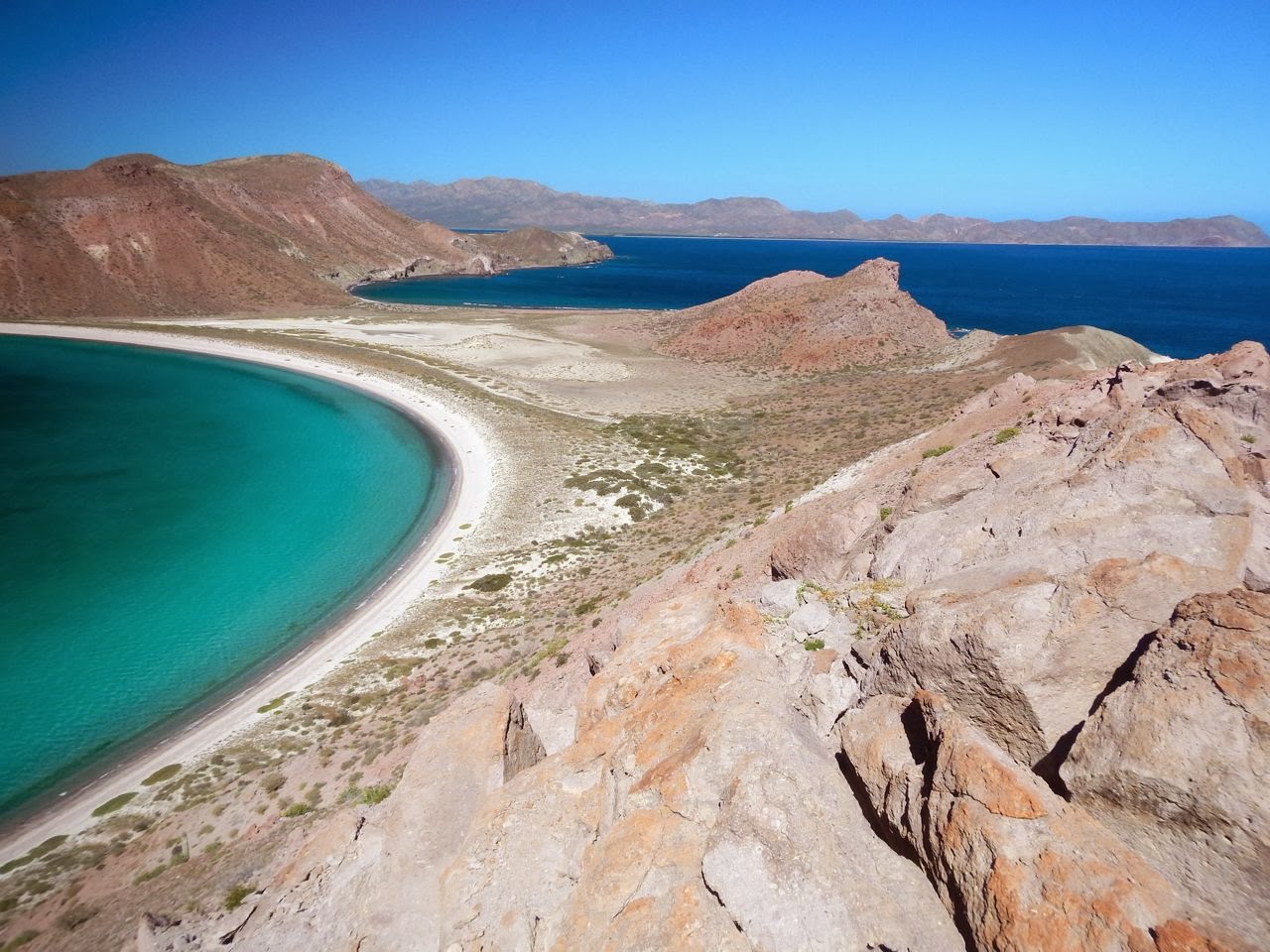 Unforunately, I've destroyed my Canon 20D.  It was in my pack with a bottle of water, and the water leaked soaking the camera.  It dried out and almost came back...but not quite.  So my nice wide angle lens is out of commission until I buy a new camera body.  Drat. The south ridge is well marked in the cruising guide and the trail is easy to find and follow.  At least until it gets scrambly, and that's fine for those of us familiar with rock scrambling.  The north ridge opens up the whole north side of the island, which is much larger.  You can scramble directly up to the ridge, but its a little loose and random.  There is actually a marked trail, if you know where to start following the marks.  For those of you who may end up on this island, the trick is that the trail goes up the eastern side of the hill, up about 1/3 of the way and then wraps around to the right ending up in a gully between the ridge you were looking at and the next one north.  I put an arrow at the base pointing toward the first rock cairn.  Hopefully the arrow and cairn last forever, it would be nice to think I left a mark that others may find later. 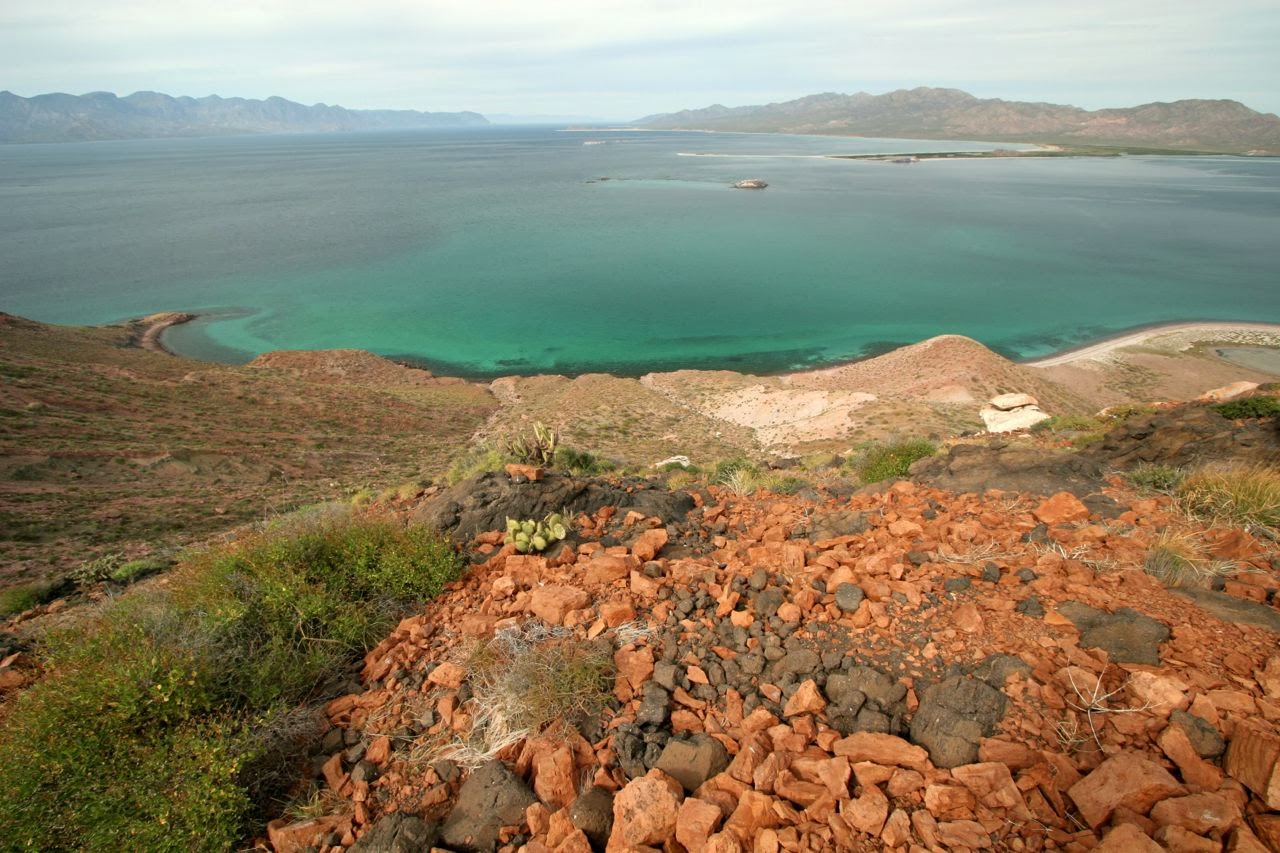 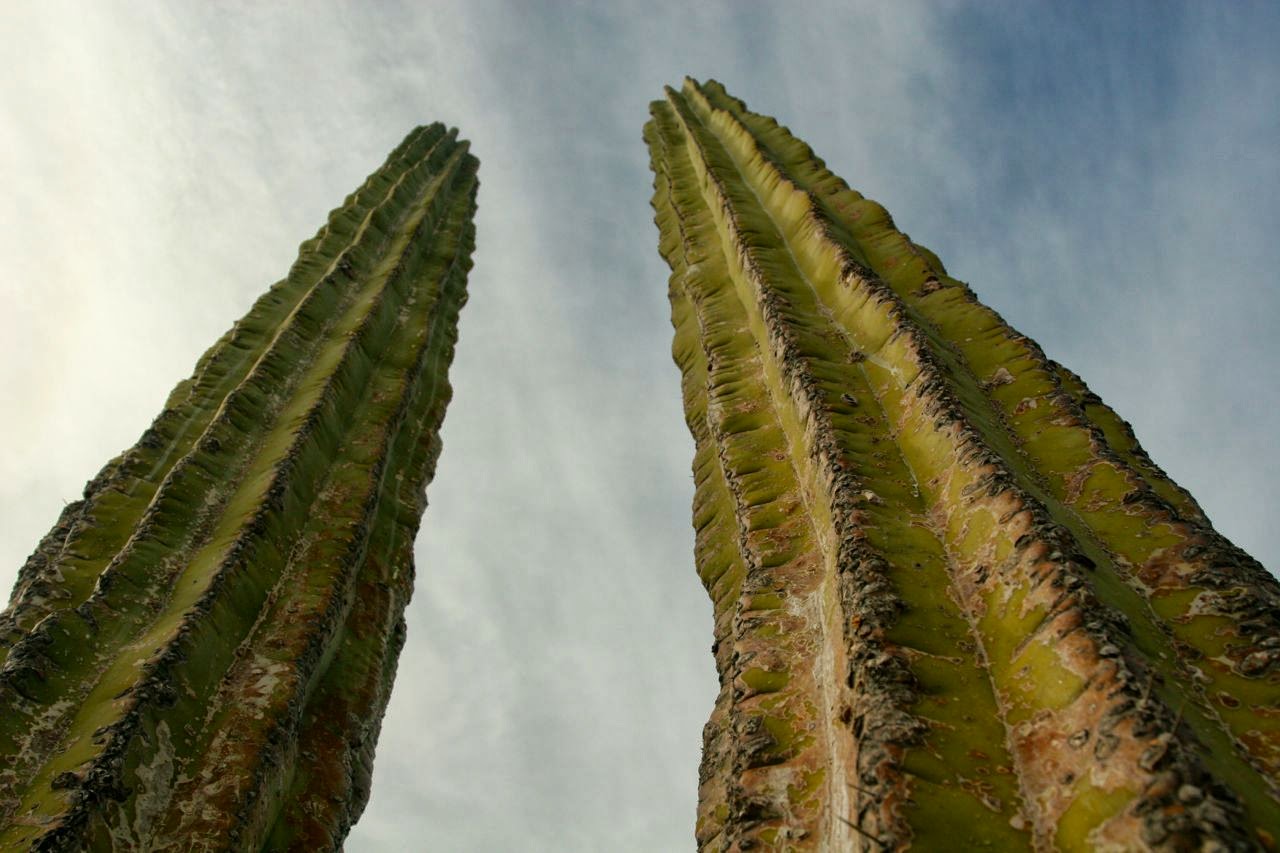 Last Samurai is a 60+ foot Nordhaven motor vessel.  She's Australian registered, with Rick and Dianne onboard.  They have cruised Australia pretty extensively and have many stories of the local fauna to give you a fright about setting foot on land or into the sea.  Crocks!  Sharks!  They've also cruised their vessel from Long Beach, to Alaska, Seattle, California and soon the South Pacific.  It would be fun to see them again down there. 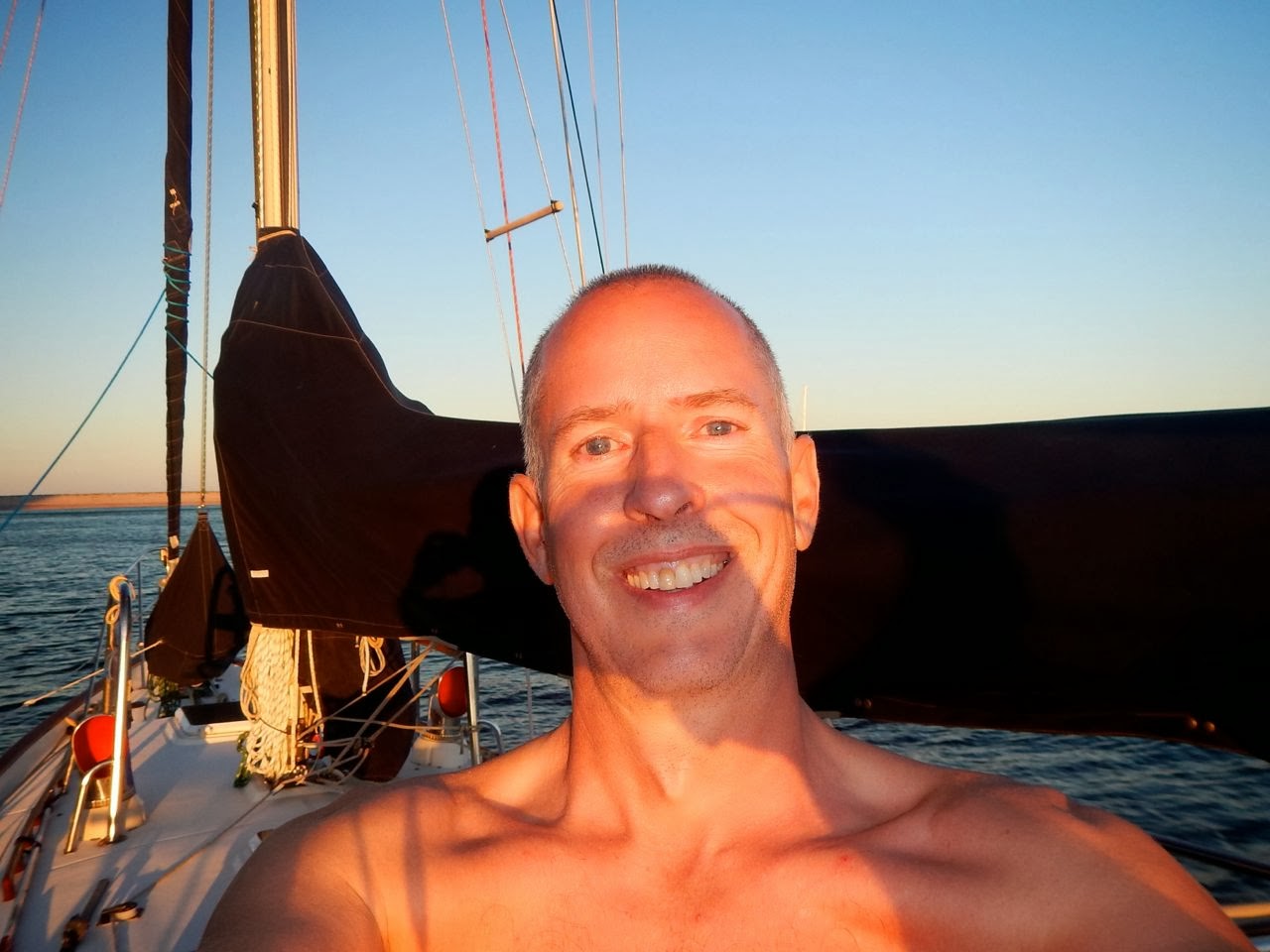