Looking around at the projects

Luckness has been on the hard at Canal boatyards for a week and a half now. 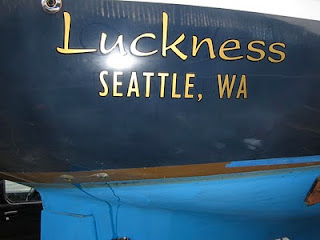 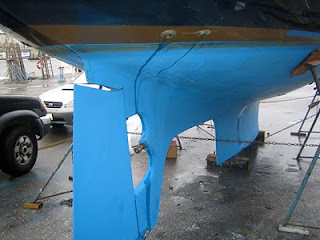 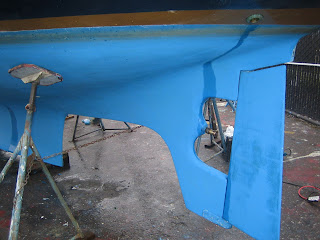 The original plan was to: install new transducers for the new instruments (new depth, speed, water temp); install the new prop; replace the cutlass bearing; install a transducer for the forward scanning sonar; replace an old grounding plate; install a new grounding plate for the SSB; install a thru-hull for the water maker and then get back into the water.  A little project creep has happened.

The picture below has the old grounding plate with the old speed transducer removed and one of the new holes marked (for the forward scanning sonar.) 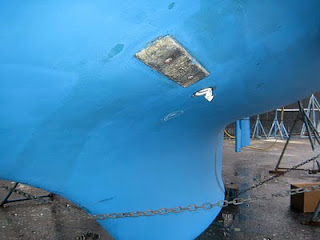 In order to replace the prop and cutlass bearing, you can normally take out the set-screws in the cutlass bearing, detach the prop shaft from the engine at the coupler and then pound out the bearing using a trick with pipe sleeves from the inside.  This didn't work for us.  The other way to remove the prop shaft is to remove the rudder - which means lifting the boat, disassembling and pulling the rudder out from below. 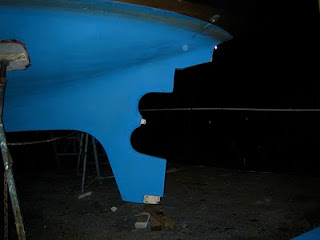 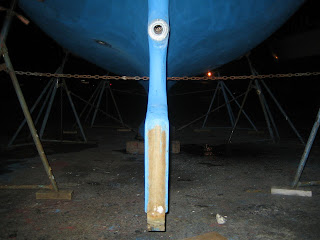 Here is where some of the project creep comes in.  After dropping the rudder, we (well, Terry as I was at work doing my day job) found some odd corrosion on the rudder shaft. 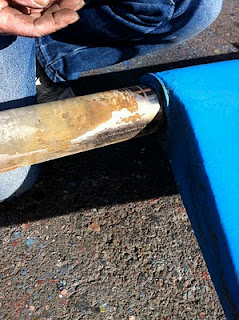 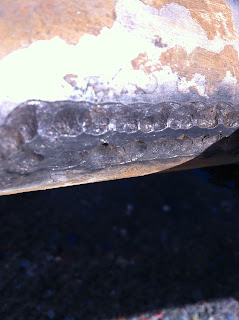 That pitting clearly shouldn't be there.  Speaking with Thumper at the factory (who has been extremely helpful on a wide variety of questions) suggested the pitting might be the result of a weld in the past that didn't use stainless steel welding rod - Terry had come to the same conclusion.  Both of them suggested that I have it fixed before putting it back in the boat.

The other bit of project creep was in the prop shaft.  A test I had heard for a cutlass bearing (the bearing surrounding the prop shaft as it exits the hull) was to shake the prop shaft - if there isn't much play in the shaft the bearing is probably fine.  We did this when the boat first arrived in Seattle and it seemed fine.  It seemed fine after hauling the boat last week as well, but I thought I would play it safe and have it replaced anyway.  It turns out the bearing was completely shot and the shaft had some pitting and ridges on it as a result.  So as a result I had a new prop shaft made.  The last piece I had done here was the coupler of the prop shaft to the engine used to be 'old school' and is now 'way better' - I now have a 'split coupler'.  The new style results in a more positive lock of the shaft into the boat, which has to be a good thing.

So once again, my playing it safe and replacing something that "probably didn't need it" resulted in two good finds - odd corrosion in the rudder shaft and a cutlass bearing that was in very poor condition.  Yay.

Onto other projects - just after the boat was hauled out of the water I realized that the bottom paint was in pretty good shape, but was thin in parts - so I added a new coat of bottom paint to the projects.  This was also a good chance to change the color to something other than bright blue which I never really liked.  Here's the hull after some sanding of the old paint.  Also included below is the new thru-hull for the water maker, the new transducer for the forward looking sonar, a new grounding plate (covered in blue tape) and the new speed/temp transducer. 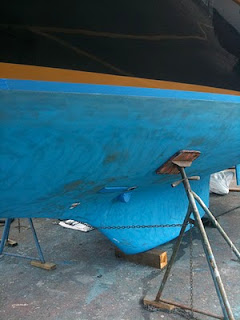 The last bit of project creep is in the hull itself.  Terry had a helper for part of this project and she had been cleaning the hull in moments she wasn't helping Terry.  The last time I waxed the hull, I also did some compounding of the gel coat, but their was still a lot of oxidation in the gel coat.  After the hull had been cleaned in parts, all of the oxidation in those areas was removed and I discovered there was a deep blue hull down there waiting to come out.  Seattle had beautiful weather last weekend, monday was a holiday - and I spent the whole time working on the hull's finish.

The very first picture of Luckness in this post shows the hull before any work - notice the grey flecks and that the color is not deep blue.  Here is a picture of the side with a section finished and a section not  yet started.  The section on the left is clean, its dull due to oxidation.  The right section is after my working on it for a while. 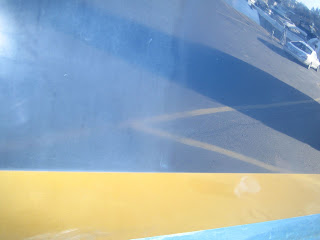 Here is the stern, with the left (port) side finished, and the right not yet started: 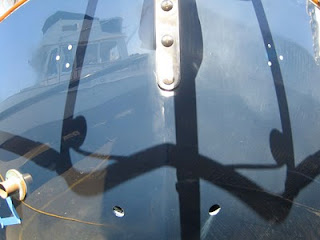 The finished surfaces were wet sanded with 600 grit, then 1000.  Then I used a sanding block at 1500 grit.  Then 3M imperial compounding followed by Collinite 885 paste wax.  It took three solid days to do a section around the whole boat up to between a foot or more below the caprail.  Doing this section is much easier when you're standing beside the boat rather than in a dinghy in the water.  I can complete this project later this summer when its warmer.

The new bottom paint is now on - I choose black: 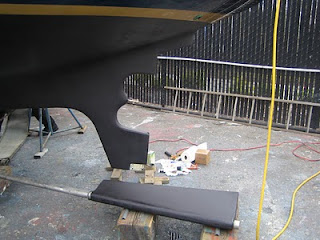 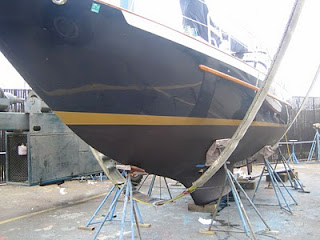 The rudder is being installed again now.  The prop should go on tomorrow followed by our splashing the boat and moving it back to YachtFitters.  Once she is back there, we'll continue working through the list of projects.

Update: a few more images before splashing the boat and moving back to YachtFitters: 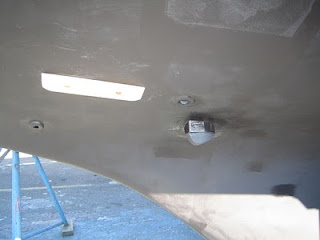 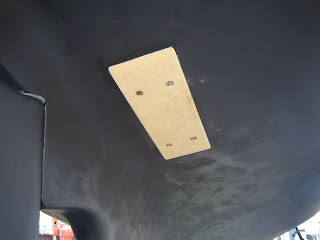 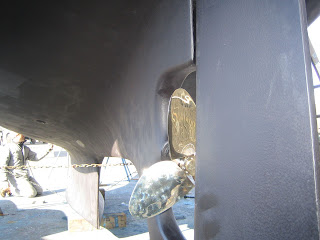 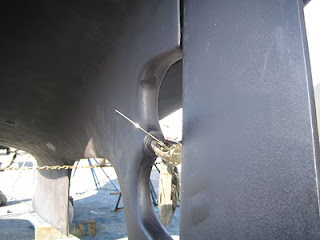 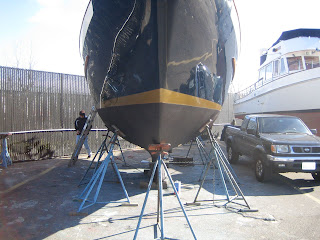 Yet another shot of the hull 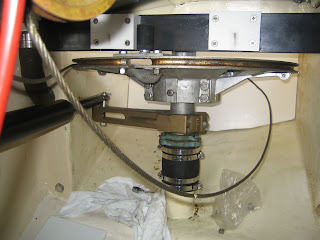 The mostly-assembled quadrant.  There is a new hose section and flax packing material 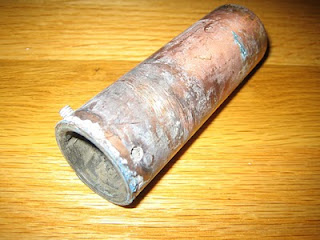 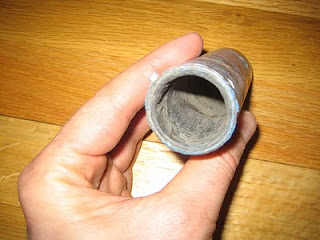 A couple shots of the old cutlass bearing.  There should be rubber on the inside, with ridges to allow water to travel the length of the bearing which keeps it lubricated and cool.

Posted by Craig McPheeters at 5:00 PM No comments:

This blog has taken a back seat to my other projects for the past few months.  I've been busy!

Ever since buying Luckness I have wanted to outfit her for ocean going voyages.  She's a blue water cruiser - if properly outfitted.  In this usage, the word Properly is going to have as many different definitions as there are sailors who would undertake (in reality or in theory) the plan on how she should be outfit.  When I was looking around for my boat I saw many which had a more complete set of gear.  Part of my attraction to Luckness was that she was very simple - there was not a long list of gear that I would need to live with or justify replacing.  Buying a more complete boat can save a person many hours of work and lots of money.  Selling a sailboat with a long list of equipment returns a surprisingly small portion of the money used to buy and install those pieces of equipment.  However making all of the choices over what pieces of gear I put on the boat is one of the things I put in the Fun category.

For the past few weeks, Luckness has been back at YachtFitters where Terry, Justin and crew are working on many installations.  They bring much more to the table than simply installing equipment - they have been doing this for a long time and enjoy clean elegant solutions and bring many ideas to the table to achieve those results.  I expect the boat to be busy for several weeks yet.

Last summer after my 16 day 'testing single handing' trip, I came back and varnished for 8 weeks.  I really want this summer to be free of any large projects and so am taking this opportunity to add pretty much every piece of equipment I can think of.  If everything goes well, I should be able to avoid any more long projects and being out of commission for some time.  Losing 6 weeks of prime summer last year won't happen again, with any luck.

There is more, but that's enough to give the impression that I'm not sitting on my butt idle.  What's going on?  Quite a lot really!
Posted by Craig McPheeters at 10:12 PM No comments: