I'm leaving Mexico today, heading to Taiohae Bay on Nuka Hiva in the Marquesas group of Islands in French Polynesia.  Its quite a distance away.

I expect the passage to take something between 25 and 30 days, maybe longer - I don't want to try to estimate more closely than that as it would just be a wild guess and I don't see the point of that.  Luckness is fully provisioned, fully fueled and in good shape.  The dinghy is deflated, rolled up and stowed below in the quarter berth.  I have some easy dinners available for the first few days and am as ready to go as I can arrange.

The weather for the first part of the trip looks like it may be lighter winds than would be ideal.  For weeks and weeks the weather offshore and SW of Baja was ideal for this passage.  Over the last week the forecasts have shown light winds SW of Cabo San Lucas for many hundreds of miles in the direction I'll be heading.  There is a little pocket of moderate wind starting today and lasting for several days.  My intention is to sail SW trying to get out of the light wind that appears later in this week and putting myself in an area of more dependable winds.  Luckness and I may make it, or we may end up bobbing around in light air waiting for more winds to arrive as well.  I slowed my progress down the coast from La Paz by several days to leave during this window, I don't want to wait any longer

I had originally planned on heading to Atuona on Hiva Oa.  Atuona is a more logical port of entry for the Marquesas than Taiohae Bay as its further to windward of the other islands in the group.  Nuka Hiva is far NW in the chain which runs SE from there to the other islands.  The islands are in the trade winds, which south of the equator blow from the E to SE.  So my sailing to the other islands in the group will be an upwind slog.  However the anchorage on Nuka Hiva seems to be much nicer - large and easy.  Atuona looks like it can get crowded with a stern anchor required.  I was starting to stress about arriving there, tired and slightly worn out and having to deal with a crowded anchorage.  So I changed plans to make my life easier.  Also, I thought - if I can't sail upwind in the Marquesas, I'll need to reconsider how I plan to get back to the Pacific Northwest from New Zealand!

Puerto Los Cabos has been a good final stop.  The marina has changed in the two years since I was last here.  There are new docks, new showers - its generally fancier and looking more complete than it was.  This marina is a good departure point.  There is a good supermarket in town, Mega, which has a very good selection of Mexican and gringo foods.  Checking out of the country is also easy here - it cost me $150 to hire an agent, but having done that you basically just show up in the office at the right time, pay him and pick up your exit papers.  I also like the location of the Marina in relation to Cabo San Lucas.  Far enough away to avoid the madness, but close enough to make for a short motor sail to escape the land-effect winds and get into what I hope will be more dependable offshore winds. 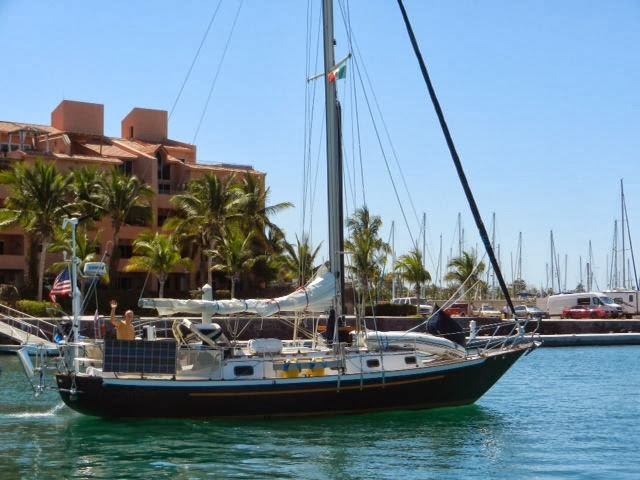 Here I am leaving Marina Cortez in La Paz.  (Thanks to Dominique for the photo.)

S/V Discovery is in the Puerto Los Cabos Marina beside me.  Andy and Betty leave today for the same destination in the Marquesas as I am.

I'll try to update the blog every few days, and update my position daily.  If the updates stop happening, please, nobody panic.  The sea is a harsh environment for electronics.  If the blog stops being updated, then just look forward to the big post that will arrive when I get access to wifi in the Marquesas.

To all my blog readers - thank you for all your support and good wishes.
Posted by Craig McPheeters at 9:24 AM